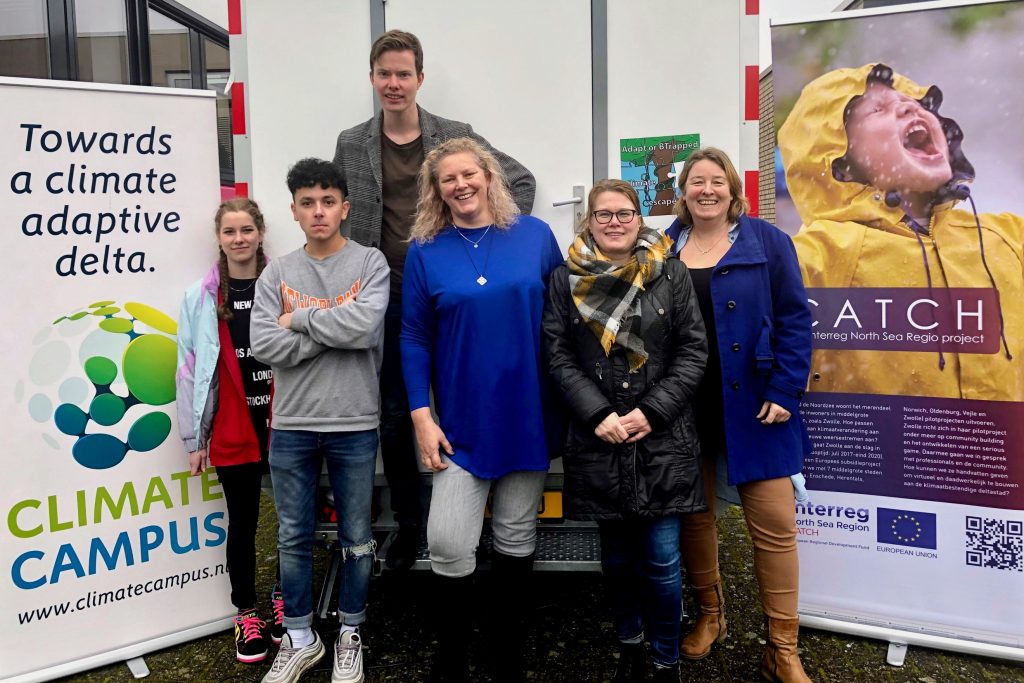 Implementation of the CATCH pilot in Zwolle

Out of the community building strategy, the following components were implemented within the CATCH pilot.

The mobile climate escape room Adapt or BTrapped (adapt or get stuck) was unveiled early 2020 after a year of designing, prototyping and testing. Two different student teams from the creative vocational school Cibap and Hogeschool Windesheim built the escape room at game studio 038Games, after an idea from trainees from Waterschap Drents Overijsselse Delta. The realization was made possible by cooperation in the Climate Campus network. In addition, the Zwolle Escape room company The Great Escape cooperated by providing a professional escape room experience. Peter Snijders, mayor of Zwolle, features in the movie clip at the start the escape room.

As the project Adapt or B-Trapped – Climate escape room was created in the context of the larger Interreg North Sea Region CATCH project by the European Union, it is possible to share the ‘blue print’ for the project. If you are interested in receiving the relevant documents (e.g. project plan and game design document) and assets, please contact j.groothuis@zwolle.nl.

Use of escape room and urban debate

After the festive unveiling in June 2020, residents of the two Zwolle neighborhoods, Wipstrik and Stadshagen were given the first chance to experience the mobile escape room in September 2020 . In this experience they enter the future (2050), where climate change has had its impact. Only 20 minutes were given to the players to escape by solving puzzles about climate change and properly applying adaptation measures. Afterwards, residents were invited to participate in the city debate which was given an individual character due to Covid.

Will residents become more aware of the need for climate adaptation if they have played an escape room about climate? This is an important question for Zwolle and the European project CATCH. Therefore, the use of the escape room was accompanied by scientific research with the cooperation of the University of Groningen. The results are expected in the course of 2022.

An action plan has been developed for playing the escape room. Municipalities and other organizations that want to use the escape room can quickly get started with this action plan, which can easily be adapted to the own situation. Are you interested to know more? Please download the Action Plan here.

After its realization, we explored how companies, governments and other organizations affiliated with Climate Campus could use the escape room for their own use by employees, business associates, residents and other target groups. This led to an agreement with the Province of Overijssel and the water board Drents Overijsselse Delta (WDOD). Both are facilitating Overijssel municipalities and municipalities affiliated with RIVUS to use the escape room, for example for the risk dialogues in their municipalities about climate adaptation. Want to know more? Please send us an email.